Paella (“pie-A-yah”) is the national dish of Spain. Like many traditions, it was originally a peasant dish created by farmers and fishermen. The dish is created in a special paella pan and cooked over an open flame.  First, the meats, poultry, and/or seafood are cooked in the pan with olive oil, then set aside and kept warm.  Next, the juices left in the pan are combined with a sofrito of green peppers, garlic, crushed tomatoes, smoked paprika, and garlic aioli.  The Bomba rice is then sautéed in the sofrito.  Bomba rice is a unique rice grown only in Spain.  It is a short grain rice which is much more absorbent, taking in 50% more broth during the cooking process. Once the rice has been sautéed in the sofrito, a flavorful chicken, seafood, or vegetable broth featuring bay leaf, parsley, white wine, and saffron is added.  Saffron is the world's most expensive spice.  It is actually the stamens of a fall blooming crocus which must be harvested by hand. Saffron is what gives the rice its golden color and richness.  Peas are traditionally added to the dish. The meats, poultry, and/or seafood are added back into the dish during the final simmer. The dish is left to rest to allow the socarrat to form.  Socarrat is the caramelized rice and seasonings which is considered the treasure of the paella.  Paella is traditionally served with a wedge of lemon and a garlic aioli sauce. 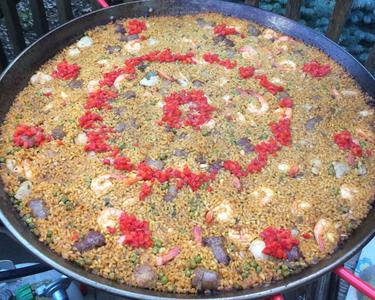 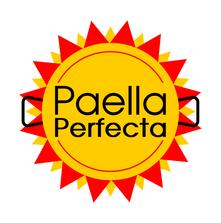